Alexos is the current general of the southern army of Eros. Alexos was born in the City of Eros in the year 160 in a famous military family. Alexos is also the uncle of Atteus “the Younger”. Alexos is a single man and has no children, he fights and lives to protect the Realm.

Alexos always wears the wolf skin of Solon’s wolf, which he killed during the siege of Nemis. 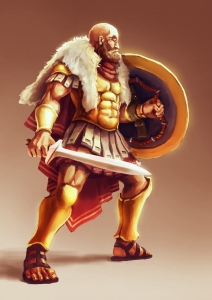 Alexos “The Wolf” was born in the year 160 in the City of Eros. After graduating from the Militium Aurumnus, the military school in the City of Eros, Alexos quickly joined the Golden Army of the Realm of Eros. He joined the Southern Army camped at Camp Istyros under the guidance of Dictator Xenetor “The Cold”.

After a few years, Alexos became the sole Dictator of the Southern Army, and so one of the most important military leaders in the Realm.

Alexos focuses mainly on defending the Realm’s current territory, something in which he is diametrically opposed to the strategy of the current Emperor, Lysander II, who focuses more on expanding the territory of the Realm. This is also one of the reasons Alexos strongly advised against the invasion of Tellaria.

Alexos is also a strong advocate of further scaling up the defenses of the Realm’s eastern borders to oppose the growing threat from the Jagradian Empire.

Due to his actions during the siege of Nemis and his major role in ending the civil war, Alexos has a bad relationship with the city of Nemis and its inhabitants. This manifests itself in a hostile mood when, for example, Alexos is in the Senate building with several of Nemis’ senators, including Hymon “The Negotiator”.

Alexos was once engaged to a woman from another noble family from Eros when he was younger. But on one of his military expeditions to Cyliria he contracted swine fever. And although he survived the illness himself, his beloved and young betrothed could not overcome the illness, and died quickly. To this day, Alexos regrets the fact that it is his fault that his wife to be had died. After this incident, Alexos never found love again, but mainly focused on his military career.

Alexos won his famous nickname during the Siege of Nemis in the year 189. While Alexos was fighting at the vanguard, his battalion was captured by the troops of Lord Solon. As prisoners, they were forced to fight with Solon’s wolf in the city’s arena. There he saw his fellow comrades fell by the mighty white wolf. Through quick thinking and ultimate strength, the young Alexos not only managed to get rid of the white wolf but even beat it and kill it with a final blow.

After this special performance, Lord Solon granted him the right to return to his troops outside the city walls.

After the siege of Nemis ended in the favor of the Realm of Eros, Alexos appropriated the corpse of the white wolf. He took the beast’s fur and wore it as a cloak during Lord Solon’s surrender. From that day on, Alexos was known as the Wolf.

Alexos is an elderly man but still has a man’s physique in his heyday. Alexos prefers to fight with a sword, but can also handle a spear. Alexos is most recognizable by his bald head and his white wolf skin, which he wears as a cloak.

You can find Alexos “The Wolf” as a 3D printable miniature in our webstore. 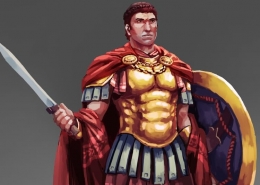 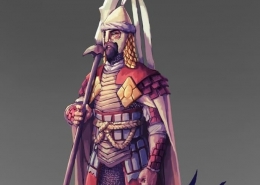 Helios is one of Solon's many sons.
The Realm of Eros