Selene was the former high priestess of Aur in the Realm of Eros. After seeing how the nobility ruined life in the realm and oppressed the poor, she decided to take action. Unfortunately for Selene, she was betrayed by one of her Acolytes.

After being imprisoned, she fled from Eros with the help of her faithful henchman Hector. After years of wandering, she ended up in the city of Jagrad to fulfil her destiny. 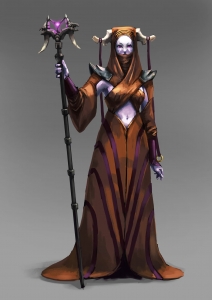 Selene was originally from the small village of Pholia in the Realm of Eros. There she was born in a warm family in the year 152. Selene was the High Priestess of Aur in Eros for many years. Selene was known for her enormous wisdom and beauty.

Selene decided to do the ultimate in her goal of destroying Eros, she decided to awaken the old evil hidden deep beneath the city. But she was betrayed by one of her acolytes, Thea. The ritual was terribly disrupted by the city guard of Eros and therefore turned into a fiasco. While the dark forces were already flowing through her veins, they suddenly became uncontrollable. Only through sheer willpower did Selene manage to drain the powers. And while Selene had the strength to let these forces flow away, her acolytes were unable to do so.

Selene was stripped from her titles and she was sentenced to death by a grand jury. But somehow she managed to escape with the help of Hector “The Broken”, the temple’s lowly gifted cleaner who was deeply in love with her. But after the loss of her powerful staf during her arrest she was powerless, for years she wandered in the Realm of Eros, awaiting her revenge, and finally it came. She was guided to the City of Jagrad with the help of Helios “The Lost” and his band of exiles.

After weeks and months of scheming, backstabbing and other cunning acts she gained power of the Children of the Moon and transformed it in the dreaded Night’s Cult, with her as their absolute saviour.

Selene used to be a beautiful woman, but has been maimed by the failure of several experiments. The magic has faded her skin and it has even taken on a purple glow.

In earlier years she always carried the Staff of Asasra while performing mystical rituals in the Temple of Aur. But after losing her faithful possession the night of her downfall, most of her magical powers were stripped from her.

Selene is always accompanied by her personal bodyguard Mehrana “The Silent”.

You can find Selene “The Night’s Mistress” as a 3D printable fantasy miniature in our webstore.

Raptara is the older brother of Zarghana.
The Night’s Cult