The City of Eros, also called the City of Gold or Aur’s City, is the eponymous capital of the Realm of Eros. The City of Eros is the largest city in the entire realm. Approximately 1 milion people live in the City and it suburbs.

The myths say that the golden City of Eros was found by the golden god Aur himself. But it is more likely that the city was founded by refugees from the southern continent. The city itself has been continuously inhabited for about 500 years but has had its heyday for the past 200 years.

After years of being a republic, Aeson I changed the form of government of the republic of Eros into an overall empire. The era has been adjusted accordingly. The year of Aeson’s coronation would from now on be known as year 1 of the new Erosian era. 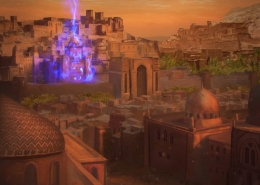 "If you want to become rich go to Jagrad, everyone can become rich over there." - Anonymous.
Xantian Desert Snake

The Empire of Jagrad
Scroll to top